Supra Delivered This Afternoon, Utility Survey, and a "Hallmark Cards" Kind of Day. 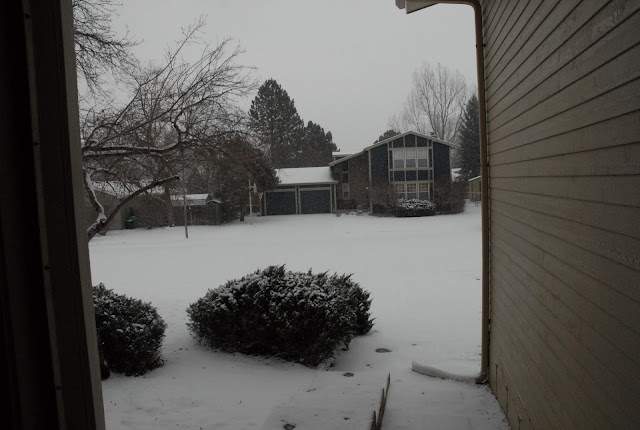 It started snowing last Sunday night, and by Monday morning we had several inches of white and fluffy. It's been getting down to "zeroish" at night, and 15~25* during the day. We had nothing planned, so my wife read, enjoyed the fire, and played with Pebbles The Wonder Dog, who really enjoys running around in the snow. She didn't care much at first for the paw washing/drying routine when she comes back in, but now she goes to the throw rug and waits for us to get the mud and snow off her paws before she leaves the sun room.

And we've been baby sitting the grandson quite a bit. GrandMomius Prime was done with the flu for a few days, so GM2 took over. He's also been spending Friday nights/Saturday afternoons with us to give GM1 a break. He's been teething, so sometimes he gets pretty cranky, but he's also at the babbling stage, and it's fun to listen to him "talk" to us. Sometimes he has the cadence right, and if he wasn't making baby sounds, you'd swear he was telling you something. He's also just started officially crawling. Full coordination of legs and arms to motivate himself around, rather than rolling. I'm noticing much more in the child development area than I did 30-some years ago with my own son. Different perspective caused by a different time in life, I guess.

Tuesday morning at 1000 my ex sent me a text that Reliable Carriers was coming to pick up the Supra "In a couple of hours". The truck showed up around 1300 and had some difficulty getting the car loaded because the battery was so dead that the engine wouldn't keep running once they took the Jiffy Jump off the battery. They left the Jiffy Jump connected while the engine ran, and after about 10 minutes, the car would idle, so they loaded it up, and off they went.

This immediately put me in overdrive (well.....*my* version of overdrive!) to finish the garage, get another new battery and another "Battery Tender Plus" for when the car is sitting here and can't be driven for whatever reason. I'd started the final push to get the garage ready last week, and it mostly involved getting the last of the Basement Workshop boxes separated from the Garage Workshop boxes and moved to the basement, and rearranging the stuff on the "pie rack" shelves in the garage. And it's a Good Thing I spent the time in the garage and basement the last week or so. ALL "Basement Workshop" tools, equipment, parts, manuals and other errata are now down in the basement, and quite a collection of "Garage Workshop" items made the trip back upstairs and were returned to their proper spot in the garage.

I'll do a post on just the Supra and her trip here as soon as I get the pix off the camera.
Posted by drjim at 6:22 PM