Well, Little Miss Pebbles had a vet visit on Monday.

She's had a mild case of conjunctivitis, which we thought cleared up from the eye drops given to us at the previous vet visit, but it came back, this time in both her eyes.

And she has these "bumps" on her back that look like insect bites, very unusual for this time of year here. I spray the back yard twice a year for fleas, ticks, and other critters, and we use Advantage flea treatment on her, so we weren't sure what was going on.

And the day before I took her back in, she started licking her left front paw, and would pull it back from me when I went to look at it.

Time to go see Dr. Grain over at the Evening Pet Clinic again!

I can't say enough good things about the pet clinic. They really care about their little furry (and feathered!) patients there, and treat you like family when you show up.

After I checked in and was waiting, I noticed on of the nails on her left paw seemed to be red, maybe bleeding a bit, and then I remembered what had happened several days before.

I was bringing in a bunch of stuff from the car, and couldn't see where my big feet were going, and stepped on one of her front paws! Normally this hasn't been a problem, as she's quicker on her feet than I am on mine, and the carpet cushions it some.

Well, this time I stepped on her when she was right at the door, on the hardwood entry area. She didn't yelp or cry or anything, and I dropped what I was doing and called her back, She wasn't limping, and didn't seem to be in any pain, so I apologized to her (apologize to a dog?) and didn't think much of it.

When I hoisted her up to the exam table. though, the Doctor and I immediately noticed one of her nails was broken right where the fur stops and the nail begins.

SO, he removed the broken nail, swabbed the area with Providone Iodine, and wrapped it up, saying to leave it covered for 5 days so it would "seal up" and not get infected.

And then we put "The Cone" on her, to (TRY and) keep her from licking/chewing/tearing off the bandage on the paw.

And the good Doctor says the bumps are most likely allergies to some type of insect bite, and to give a Benadryl twice a day.

So, here she is looking a bit upset over having a bandaged foot, AND a cone her. 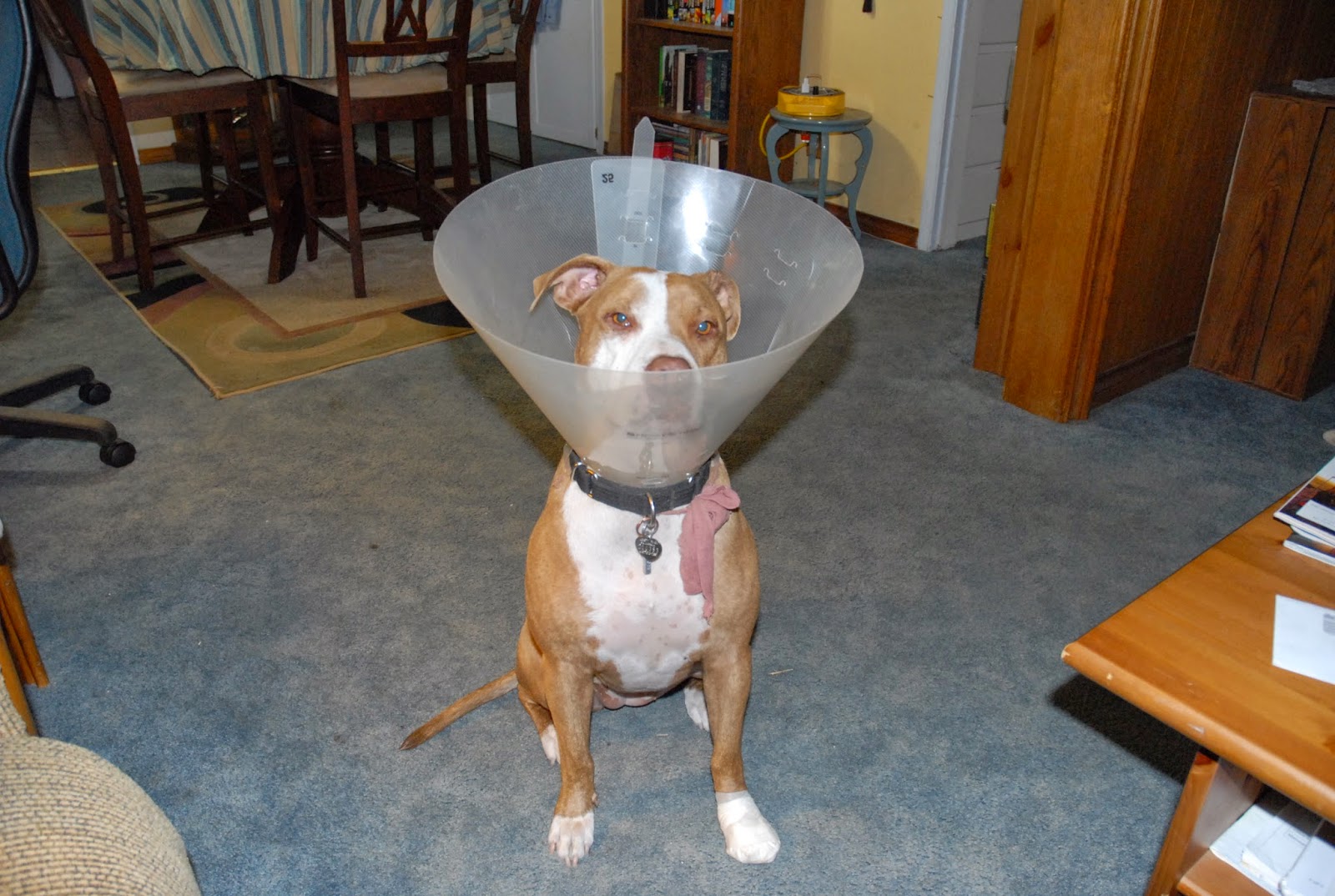