Yep, it's been a week between posts. I've been busy at work getting ready for the next (and my last) launch, and tinkering on the Supra, and playing around a bit on HF radio.

Today I put my "Eggbeater" satellite antenna back up. I'd had it kind of in the middle of the driveway on the non-penetrating roof mount, but when I bought Ms. Swan, I had to take it down because I needed the driveway space.

Well, today I moved the Rohn mount to a suitable place, and put the antenna back up using different mast. I'd used 1-1/2" rigid EMT (heavy wall "conduit" for the non-techies), and it weighed too much. It was very difficult to walk it up, and frankly, that size rigid EMT isn't very strong.

So, I found a company that sells surplus military aluminum mast, and bought some. It's bigger than I counted on, so I had to redrill a bunch of holes, and swap out all the U-bolts I used, but finally finished it after a few hours. Typical "45 minute" project of mine that winds up taking 3 hours!

ANYWAY......now that the antenna, rigid EMT, Rohn NPRM, and Eggbeater antenna are back in the air where they belong, I have an additional 30~40 square feet of driveway space feed up, and a lot less clutter. Still have to get rid of a small Harbor Freight utility trailer that I bought a couple of years ago for a project that didn't pan out, and I'll have even more space.

So, what does this have to do with Ikea? Well, my sweet little wife went and bought a 5-drawer chest to put in the guest room (aka former "Kid's Room"), and she spent the last several days staining it, and getting some different drawer pulls for it. I started putting it together yesterday, and noticed that the quality of this product from Ikea seemed a bit lower than the last Ikea bit of furniture I built, which was also a chest of drawers.

Imagine my surprise when I noticed something funny about the drawer assembly.

Here's a drawer pretty well along in it's assembly. Please ignore the poor stain job....my wife has never stained any knocked-down product before, and wasn't sure which parts were outside (to be stained), and which were inside (to be left in natural wood): 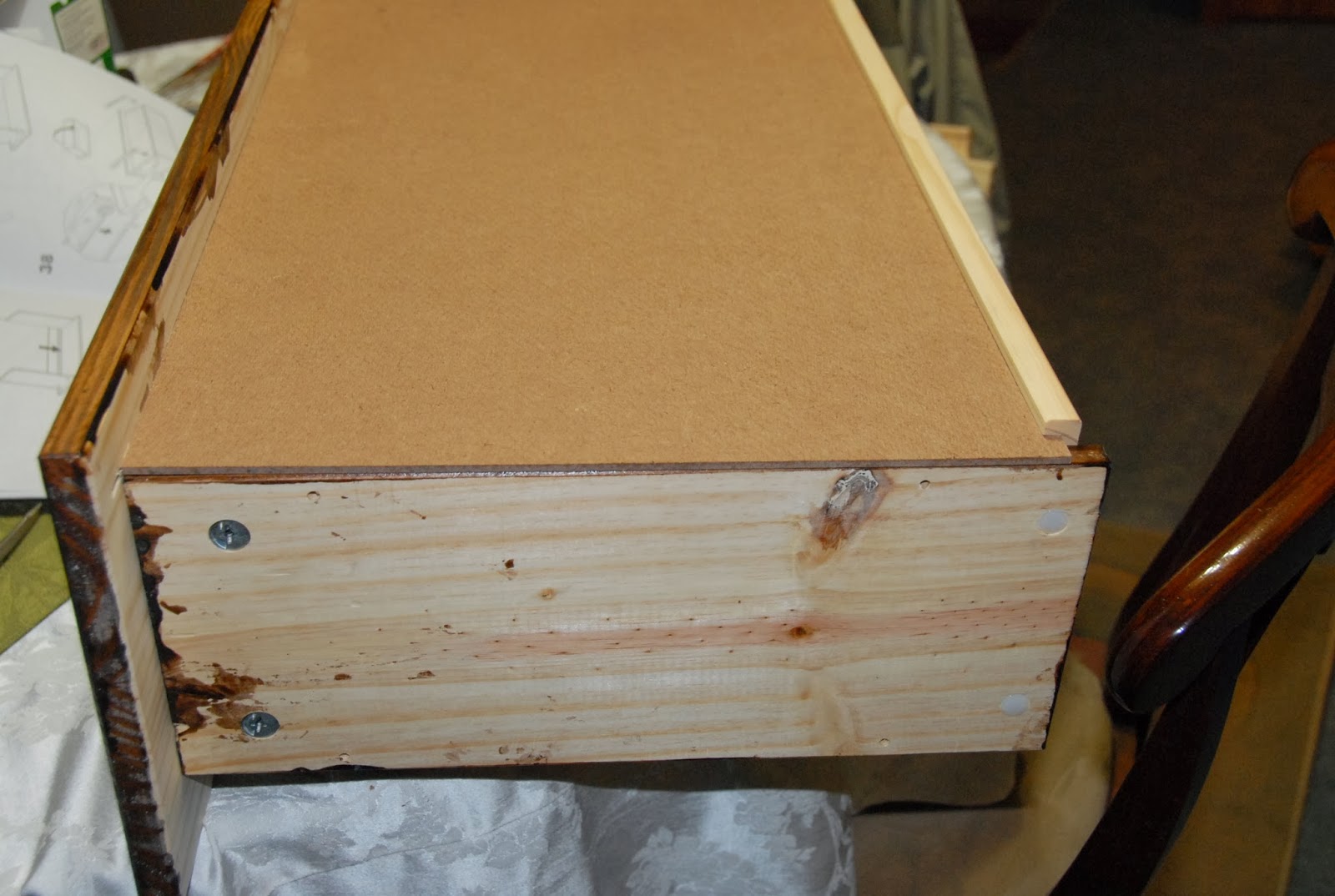 Looks "Pretty OK" to the casual eye, but look closer. The shelf bottom is held in place ONLY by fitting into the groove on the front of the drawer, and the groove in the back panel of the drawer. The last chest I built from Ikea had the side panels slotted so the fiberboard drawer bottom was held on all four sides.

If you put anything heavy into this chest, and some people will, there's NOTHING holding the sides of the drawer bottom, and it will droop: 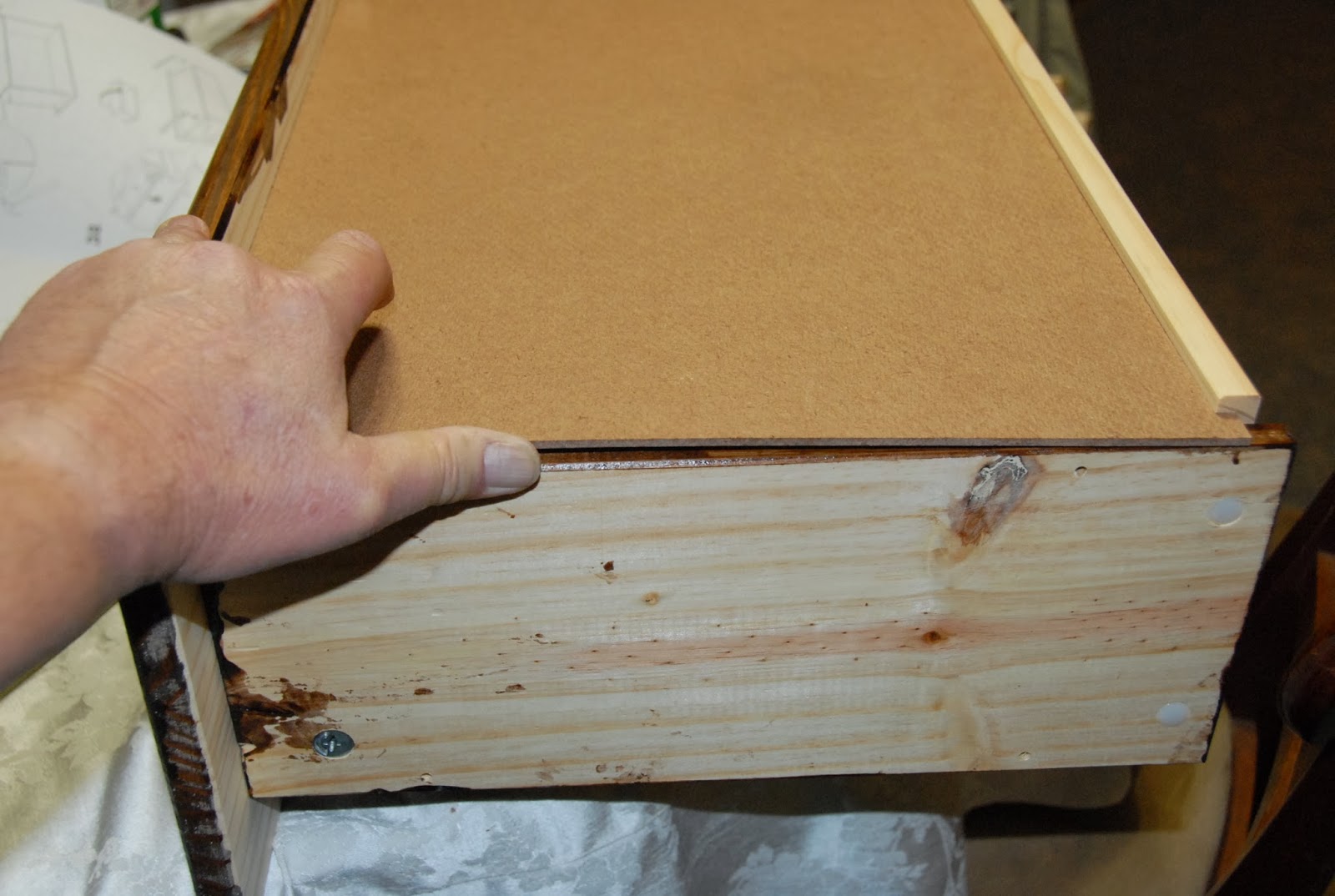 And I hardly used any force at all to separate the drawer bottom from the side pieces.

OK, so no big deal. I'll just go out to the garage, grab some small nails, and secure the drawer bottom to the sides like it should have been out-of-the-box from Ikea. 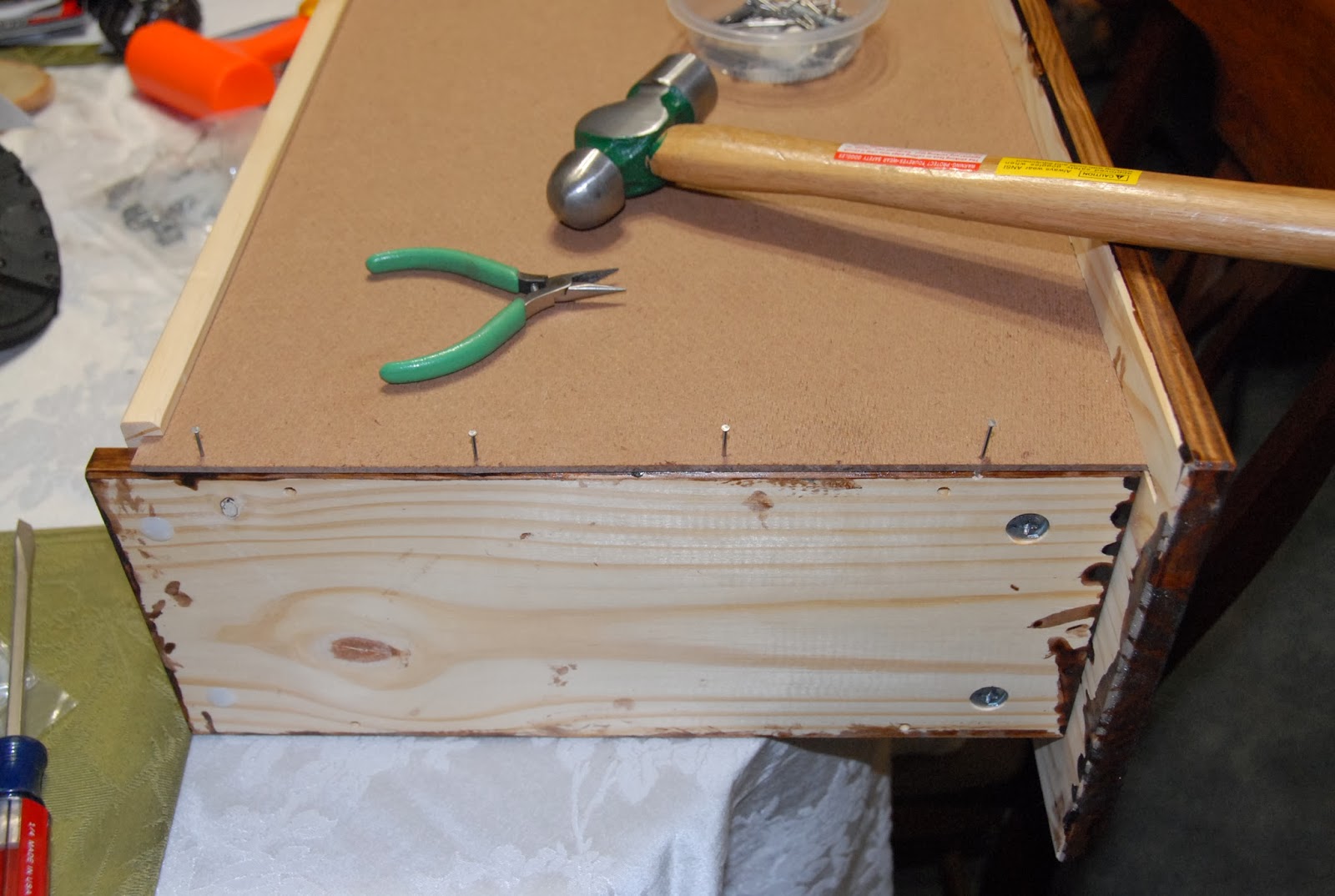 This is an incredible CHEAPENING of the product. I can kind of understand them designing it without the grooves in the side plates to save a few cents, but to not even give you 25 cents worth (probably less considering how many millions of this size nail they buy) of little nails to use to properly secure the drawer bottom?

This was a ONE HUNDRED DOLLAR piece of furniture, and the bastards chiseled every fractional cent of profit out of it they could.

And no more of my cash, either.


It'll be cold day in you-know-where before we go back to Ikea to buy anything again!

Oh, and some of the holes barely lined up, too.

Ikea used to be a place where you could get low-cost, knocked-down furniture that was of reasonable quality, but it looks like they've jumped on the "Make It As Cheap As Possible" wagon.