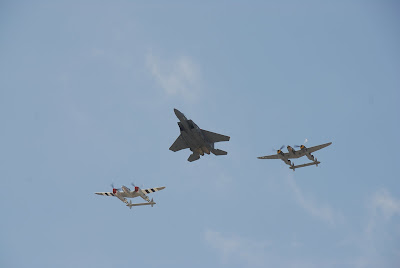 The YF and I went to her first airshow today, out at the Planes of Fame Air Museum in Chino. I used to go to all the airshows out here in SoCal, stating with the airshow at MCAS El Toro, going next to Chino, then the Point Mugu airshow, then the Miramar airshow, and finishing up the season with the Big One at Edwards AFB.
Sadly, El Toro is closed, and Miramar, former home of the Navy's Top Gun program, is just a shadow of its former self. I haven't checked to see if Pt Mugu still has the airshow, and Edwards, as fascinating a place as it is, has turned into a PITA to get into and out of for the airshow due to all the development of the surrounding areas.
The Chino show was great this year, with a large crowd of friendly people. The weather was kind of hit-or-miss, with clouds early, clearing in time for the show, and then clouding up again around intermission time. It cleared again. though. and the flying was great.
The most interesting thing I noticed, is that when the National Anthem was sung for the opening of the show, the place got so quiet you hear a pin drop.
ALL the men took off their hats, and a good number came to attention with some of the best executed salutes I've seen in years. Guess airshows attract a different crowd than all the other "sporting events" I've seen and been to over the years, with whistling, talking, and hootin' and hollerin' going on during the Anthem. Shameful behavior, but not today at Chino.
Anywhoo....I took several hundred pictures, and until I get them sorted, cleaned up, and posted on Photobucket, this one will have to do.
It's the "Heritage Flight", with an F-15 Strike Eagle flanked by two P-38's.
Enjoy, and I'll try and get the other pix online ASAP.
Posted by drjim at 6:19 PM