Fun With My FlexRadio 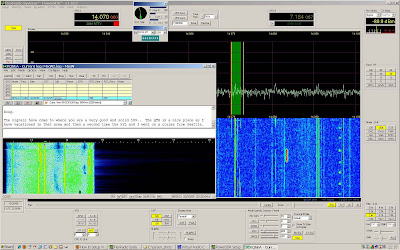 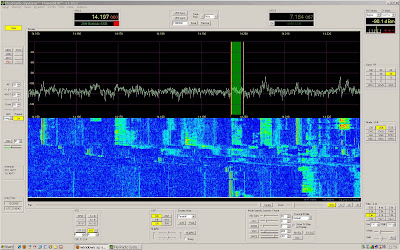 One of the nice things about having my HF vertical back in operation is that I've *finally* been able to devote some time to getting my FlexRadio Systems Flex-5000A properly set up, and back on-the-air. I hadn't used it in so long that I wound up uninstalling everything on the Windows PC I built to use it, and installing all the latest and greatest stuff from Flex.
I had to upgrade the FireWire driver, and upgrade the firmware in the radio. Never though I'd have to "flash the firmware" in a radio like you upgrade the BIOS in a PC, but then radio has come a long way since I started tinkering in the basement back in the early '60's! While I was at it, I installed the latest version of PowerSDR, which is the software that controls the radio.
The first screenshot was taken earlier today, and shows the operating "console" for my Flex-5000A. All the tuning and volume adjustments are handled by using the mouse, keyboard, or both. The radio has no knobs, although you can use a Griffin "PowerMate" multimedia controller, or a Contour ShuttlePRO to implement the various functions. I have a ShuttlePRO that I use on my audio/video editing PC, so I can just plug it into a USB port on the FlexRadio PC if I "Feel the Need" to turn knobs.
I was listening to 20 Meter (14 MHz) Single Sideband, and the top window in the display shows the frequency I'm tuned to in a Spectrum Analyzer type display, while the window under that shows a "Waterfall" display. The horizontal 'smearing' of the received signals in the waterfall display were caused by my tuning the radio as the waterfall was recording the signals.
The second screenshot was taken later while I was listening to one of the digital transmission modes on 20 Meters, using a program called "MixW2" to decode the signals. MixW is kind of a Swiss Army knife for Hams running digital, as it will decode all of the current modes, display them in a nice window, and log them for you.
My Flex-5000A is a "Software Defined Radio", which basically means the radio just acts as a "Front End" for the RF conversion, and ALL the processing, frequency control, modulation and demodulation is done in software, rather than by hardware in the radio. Since ALL the processing is done in software, the implementation of "Brick Wall" filters is easily done, making adjacent channel interference (a.k.a. "Bleed Over") a thing of the past. While I dearly love my Kenwood TS-950SDX, the last of Kenwood's Big Rigs, and one of the best 'conventional' radios ever made, it can barely hold a candle to the interference-fighting features in my Flex-5000A. Even with the INRAD Roofing Filter kit, and a full complement of INRAD crystal filters in the first and second I.F. stages of my TS-950SDX, there are still times when really strong, close-in signals cause some "discomfort" in the receiver. While I can clean up most of it by using the Slope Tune function in the Kenwood's DSP, and backing down the RF gain some, this can have some other subtle effects if you're trying to copy a really weak signal next to a strong one. With the Flex, I just select either one of the pre-programmed narrower bandwidths, or use the custom function sliders to "make" my own filter, and POOF!, the interference just disappears.
The concept of a Software Defined Radio has been around since the early 1970's, and like a lot of High Tech concepts, was first used by the Military who needed radios that could cover wide frequency ranges, different operating modes, and be easily upgraded. They didn't get popular with experimenters and Amateur Radio operators until the price of high-speed analog-to-digital converters came down. The first radios used a high-end computer sound card to handle the digitization of the I.F. signals and then handled the demodulation/modulation in software. They worked quite well, but were limited by the constraints of the sound card used. The simple built-in sound cards on most PC's don't have the sampling rate and bit-depth required to make a high-performance SDR, and not too many people wanted to buy a $200 sound card to dedicate to "just" their radio.
There are also other SDR's available if you don't want to spend the $$ for a Flex, or if you just want to listen. One of the original, and still one of the best' is the "SoftRock-40" radio, a very simple board-level kit that plugs into a USB port on your PC, and can use either your built-in sound card, or a better one, and runs the (FREE!) PowerSDR software. They're out of the original kits, but Version 5 of the kit should be available soon.
Radio sure has come a long way since I got interested in it!
Posted by drjim at 2:52 PM