Been Busy With TV Repair

Well, my wonderful Panasonic TH50PZ85U 50" plasma took a dump a few weeks ago, and I finally repaired it.

When it goes into this "SOS" mode it won't turn on, and is completely dead except for the power LED.

It had been acting up this way for 6 months or so, but unplugging it for a few minutes would clear the fault, so we kept using it.

It finally got to the point where unplugging it for a few days didn't clear it, so I started researching what board inside to replace.

Since the set was made in 2008, it's not "officially" supported by Panasonic any longer, but there are a few failures they'll fix under an "extended warranty", but this wasn't one of them.

Thanks to my good friends over at the AVS Forum, I was able to diagnose, and repair, the problem.

The problem is a 1uF "chip" capacitor on a daughter board on the "P" (power supply) board failing, and bringing down the +5 Volt logic power supply.

And it's not just a chip cap, but a very small chip cap, as shown in this picture from the forum member who figured it out, and posted the info on the forum: 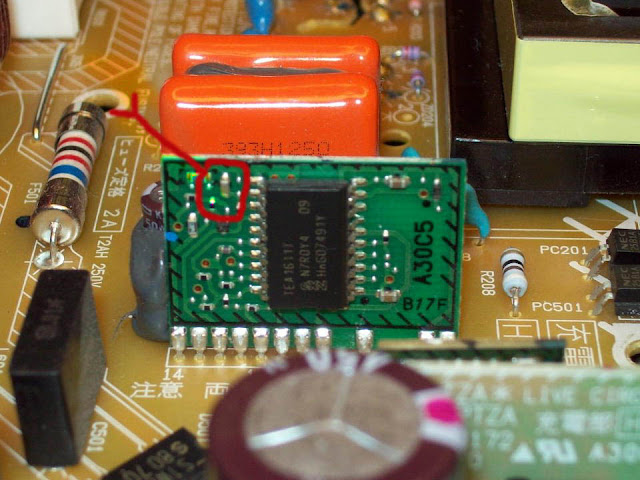 First step was getting the set off the wall mount, and over to my temporary "work bench", the coffee table with a nice, thick comforter on it to pad the GLASS screen-side: 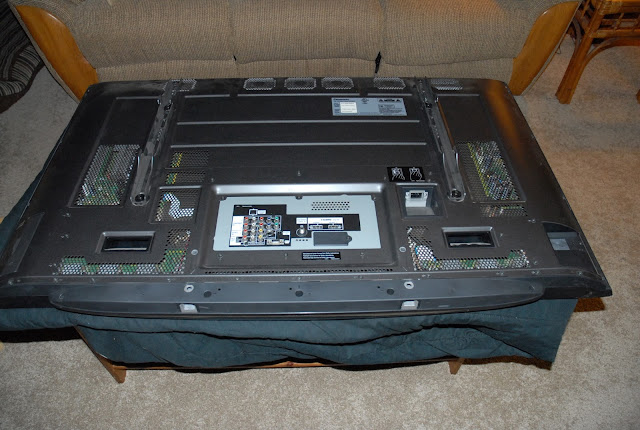 Then I had to remove all the $$##@@!! screws holding the back panel on so I could access the printed circuit baords inside.

NOTE: The "P" board has already been removed in this shot.  It sits just above the connector assembly (the "A" board), and just below where all the connectors are dangling: 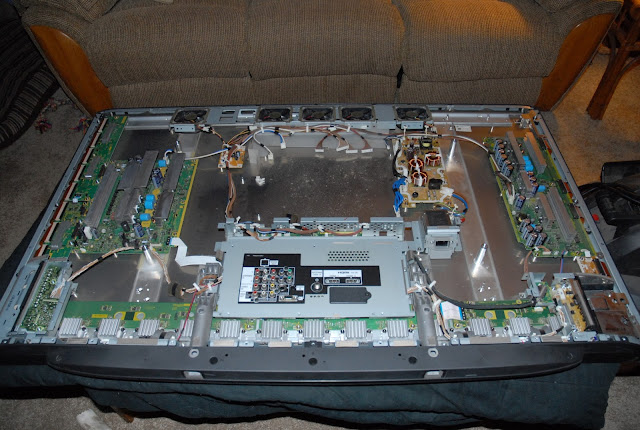 This is the "P" board in place before I pulled it: 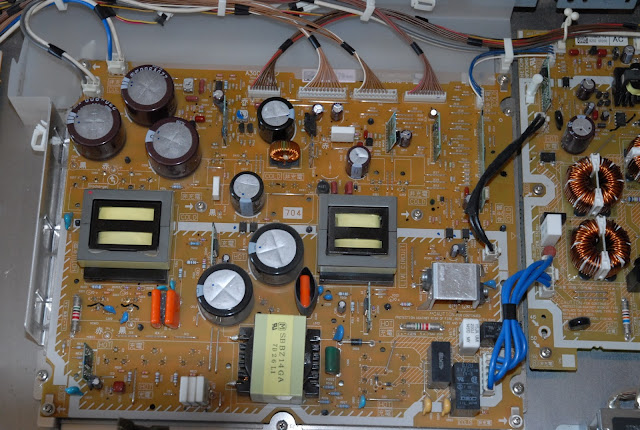 The "P" board is mounted to an aluminum plate, and once the "P" board is on-the-bench, there's more $$%%##!! screws to remove before I can get to the backside, so I can unsolder the daughter board: 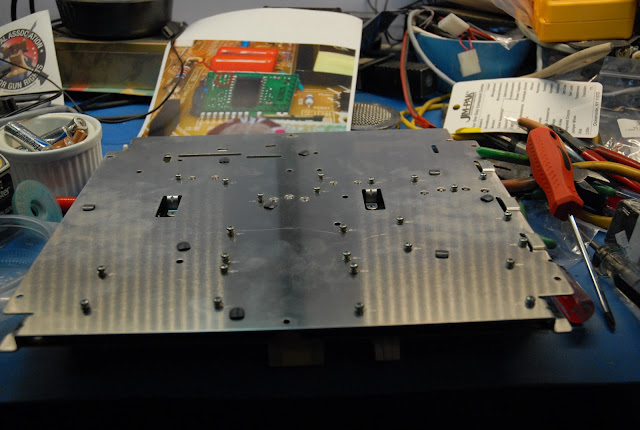 Finally, the board is free of the aluminum plate, and on-the-bench: 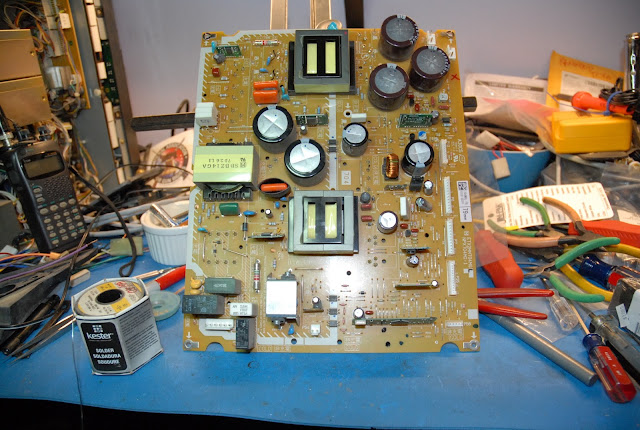 And why are there so many screws on the back of the plate? To attach to all the individual heat-sink plates on the power transistors!: 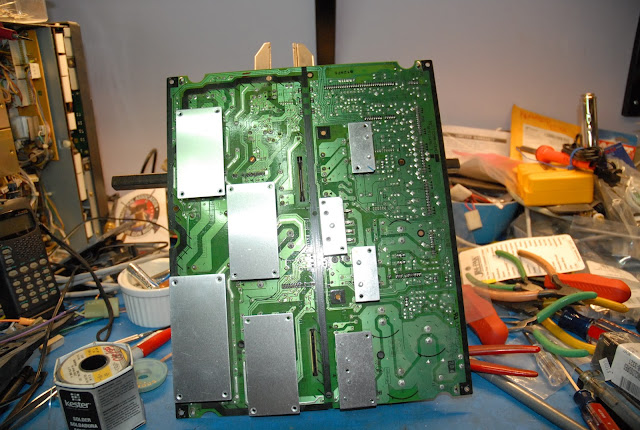 Finally, after unsoldering the daughter board, I can clamp in my PanaVise, and remove the failed capacitor, which is the greyish colored rectangle mounted longwise up-and-down, to the left of the Integrated Circuit (wonder when we're going to be forced to change the name of ICs?), towards the top edge of the board: 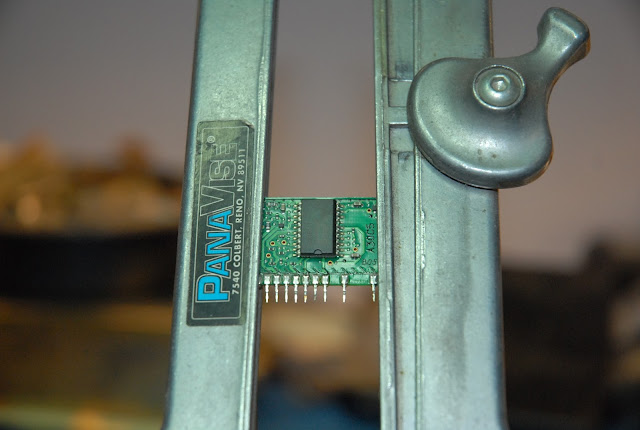 And here's the board with the failed part removed: 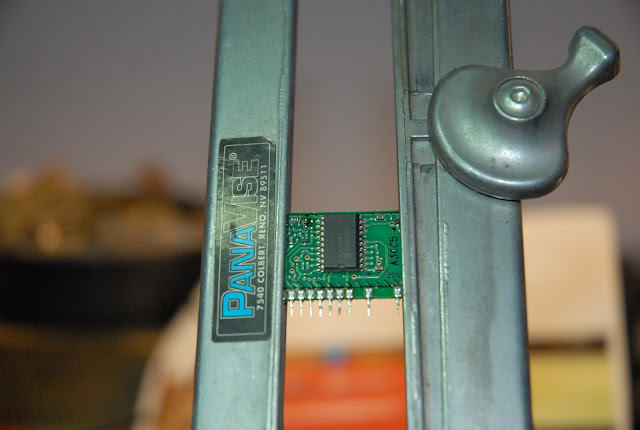 Since there's NO WAY I'm going to get an exact matching part, and it would be VERY difficult for me to get something that small soldered back on, I went with a 1uF, 35V, leaded Tantalum capacitor. I had some of these left over from some long dusty project, so I trimmed the leads, and bent them to fit the pad spacing on the little board, and then tinned them. The package (a "JimPak" from Jameco Electronics) these caps came from said there were ten in the package for a price of $2.95, so in small quantities they go for 30 cents. The original chip cap in there was probably about ONE CENT in the quantities Panasonic buys!: 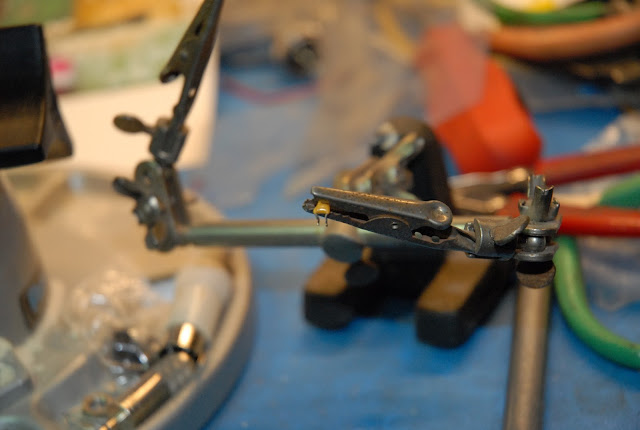 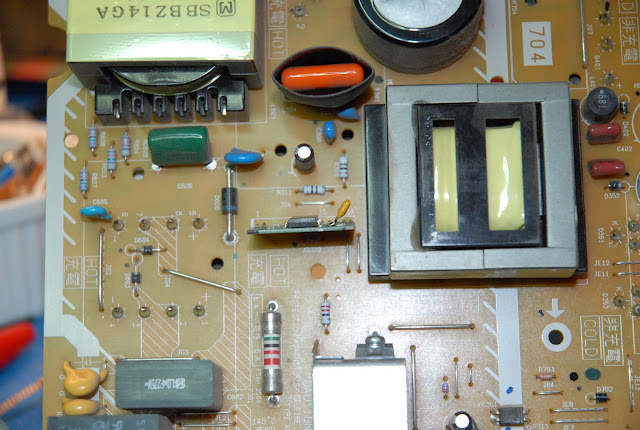 I'll stand this upright, and put a dab of Dow 5140 NON-corrosive RTV on it, and let it cure overnight, as having parts "hanging by their leads" like this is generally a Bad Idea unless you use some "staking compound" to protect them for vibration and thermal cycling, which can cause the solder to fracture, and the part fall off: 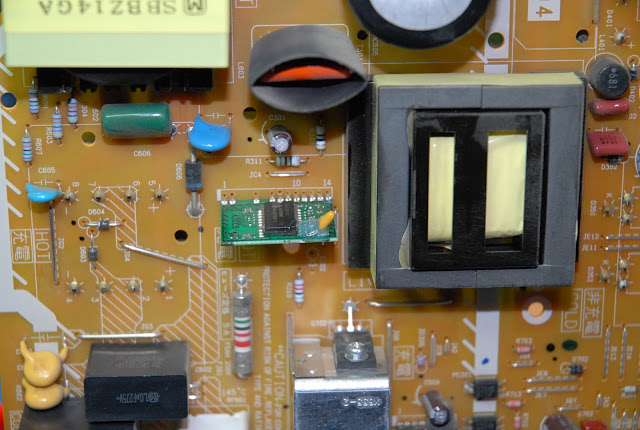 While waiting for the RTV to cure, I went ahead and bought some window-sealing tape, the 3/8" thick stuff with adhesive on one side, as the original tape had disintegrated from age and heat. Each of the cooling exhaust fans at the top of the set had similar tape applied to seal each fan to the cooling holes in the sheet metal back panel. They did this to ensure that the fans would exhaust the air through the cooling holes. If the fans weren't sealed tight, there's a very good possibility that instead of the heated air being exhausted from the cabinet, it would simply recirculate within the cabinet, rendering the fans pretty much useless.

I saw the sealing foam when I pulled the back panel off and smiled. This is truly a case of "Been There, Done That, and Got a Monetary Award For Thinking of It" in my career. One of the places I worked at was having trouble with severe overheating of a large motor control cabinet that had all the other Engineers scratching their heads. They had plenty of properly sized fans in the cabinet, but hadn't thought about exhausting the heated air from the cabinet. I was asked to help recalculate the airflow requirements and to check that the correct size fans had been used, and when I went over to where the things were being built, I just about fell down laughing.

There were NO holes, lovers, or vents in the cabinet! All the carefully sized fans were doing was moving the air around inside the cabinet, and letting the cabinet and all the sensitive electronics inside slowly cook to death.

The temperature inside the cabinet dropped SEVENTY FIVE degrees, failure rate of the system dropped to about zero, and I got a nice check from corporate headquarters in recognition of solving a problem that had been costing the company thousands of dollars in warranty repairs.

I replaced the foam seals on the fans, vacuumed out all the dust that had accumulated over the years, and spent some time installing all the screws that held the aluminum plate to the "P" board, and put the board back in the set, and installed the back cover.

Since my son was working, my stepson came over, and we put the set on the desk top stand, connected all the cables to it, and powered it up.

It worked just fine, so we shut it down and installed it back on the wall mount, where it ran for several hours last night.

I really like this TV, and I'm glad I was able to repair it!
Posted by drjim at 5:19 PM