We Start Drilling On Tuesday..... 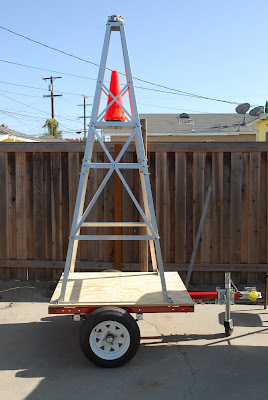 Or at least that's what my stepson says we can use it for if it doesn't work!
Didn't get too much else done today other than get the tower solidly mounted to the deck, clean up some of the aluminum carnage in the garage, and get the antennas ready for final assembly and test. The 'outermost' four of the eight mounting bolts go through the steel frame of the trailer, so this thing is rock solid and stable. You could probably pick the whole thing up by the tower and it wouldn't flex very much. And in case you're wondering, the orange "Dunce's Hat" you see is a cut-down traffic cone. After I install the mast, I'll use a hose clamp at the top of the cone to clamp it to the mast, and I'll have a nice, inexpensive rain shield for the Azimuth rotator.
Tonight I have to make the power cables for the 300 Watt VHF and UHF amplifiers I have, and maybe I'll mount them to a plate of some sort so they don't go sliding around on the table when we use them, and I might mount a couple of small fans to push some air across the heatsinks to keep them nice and cool.
Time for dinner now. One of the reasons I knocked off early outside is that my stepson has fired up the grill and is cooking a nice Tri-Tip that he started marinating last night. He's quite an accomplished chef, and the YF and I always look forward to his creations.
Posted by drjim at 4:15 PM