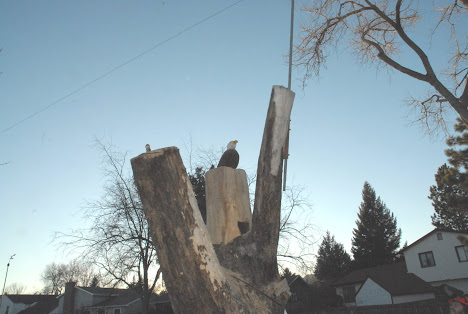 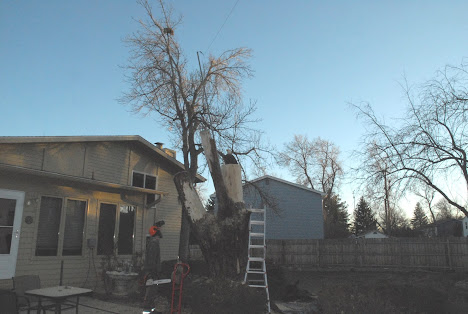 Well, it's a start! The young guy in all the PPE is Trevor, who lives down the street and has all kinds of hand-carved yard art made from sections of trees for sale. We stopped and talked to him about carving what's left of the cottonwood tree some time back while we were out walking Pebbles. He said he'd never done a whole tree before, and was looking for one to do, so he'd be willing to come by, look at it, and give us a quote.

He was supposed to go to carving contest using a felled tree early this year, but then The Virus hit, and they cancelled the competition. So he's using this to get his feet wet in the "Whole Tree" category, and we'll be getting a LOT more work done, at a rock-bottom price, as this will be one of his portfolio pieces. He's done some amazing work, and I'll have to go take some pictures at his place after he's done with this one.

He's also going to make a nice, flat, vertical section to bolt the antenna support back to the trunk, and since it will be mounted solidly into the trunk, I'll be adding another 5' section of mast to get the center up to slightly over 30' AGL. I'll also raise the end points another 5', which will be about as good as it's going to get for the wire antenna.

Meanwhile, back in the kitchen, we have..... 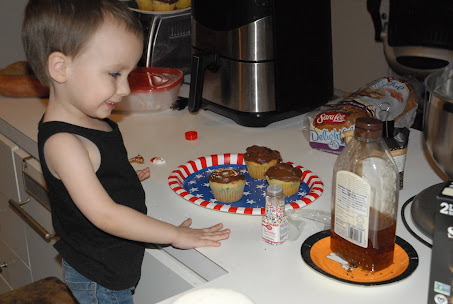 And TLG is quite proud of his decorating abilities. 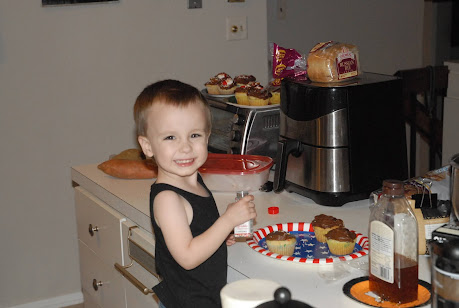 Happy Thanksgiving To All 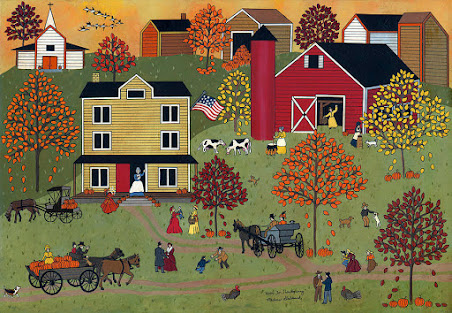 We were going to head up North in rural Larimer County for Thanksgiving, but SLW has a bit of a cold, some of the relatives attending are in their mid 80's and she doesn't want to expose them, and as she's headed to Kaliforniastan next week for a visit, she wants to lay low, rest up, and steel herself for the trip.

So we'll have a quiet dinner and take the dog for a walk, giving thanks for all we've been blessed with.

Hope you all have a wonderful Thanksgiving! 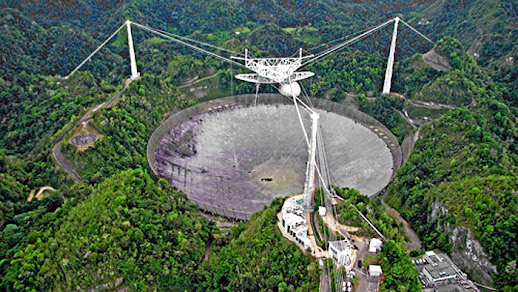 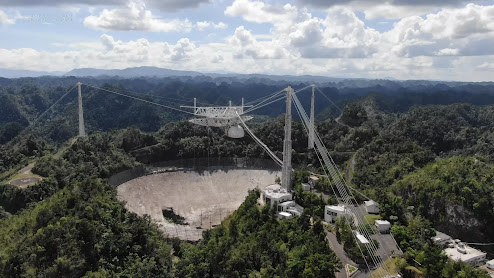 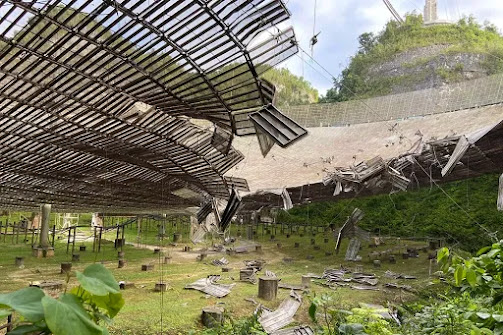 Not sure what caused the unusual "hump" in the weather recordings today, but a few things stand out. 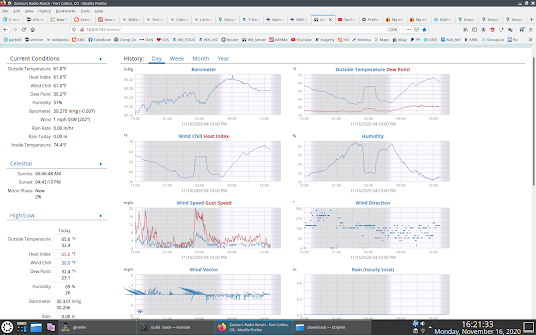 The barometer took a "dip", while the wind speed and direction shifted dramatically. The temperature went up twenty degrees for about 2-1/2 hours, and the humidity took a corresponding drop.

I'd put this down to a "Downslope Wind Event", or Chinook, but the wind was from the Southwest this time, so not much "Downslope" from that direction.

Since I wasn't awake at the time, I don't know what the radar was showing.

Except it's been pretty windy here. We've had sustained winds of 25~30MPH with a few gusts hitting 40+ since last night. Our tree guy/arborist was supposed to come by today and trim the trees, but when he saw the winds today, he called and said he didn't think it was a good idea.

One thing he mentioned when he came out to give us a quote was that the 18' tall "stump" from cottonwood tree we had cut down needs some attention. Since we didn't get it carved, it's basically a big, DEAD tree in the backyard, and Mother Nature has started "reclaiming" it. He said there's now a colony of Carpenter Bees in it, and they need to be exterminated. or they'll bore out the tree enough to seriously weaken it. He says they can also attract termites, which will spread into the house. So, we have some chemical warfare to wage here, and then the stump has to be "sealed" to prevent further degradation. No estimate on the cost yet. If we have to get rid of the entire thing, though, it's going to cost some $$, and I'll lose my center antenna support.

On Veteran's Day we went down to the Candlelight Dinner Playhouse to see "The Denver Dolls", a female trio who perform 40's/50's/60's music. They put on a good show, with Veterans and active-duty people being admitted free. There was a 97 year old WWII vet in the audience, and he got quite a round of applause when he was asked to stand up.

A nice evening, and relaxing break from all the political turmoil going on.

Ramirez says it far better than I can.

Thank you all for your service and sacrifice. 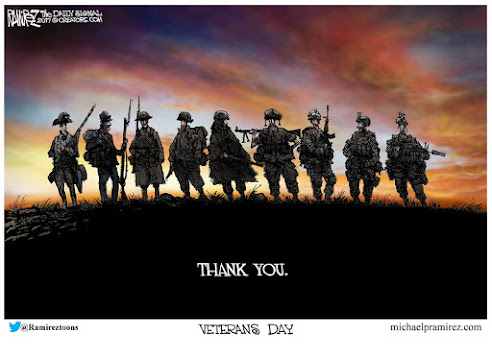 NWS is forecasting up to an inch. Nothing sticking on the streets, but the yard is starting to get patches of white.

No, Beans (and Rev Paul), I haven't got a new snowblower yet. SLW was asking if we actually need to buy another one.  Well, if we could get somebody here to shovel what comes down, and do it RIGHT NOW, it would depend on how much they charged. The snowblower will cost about $1200 out-the-door. It should last at least ten years with the maintenance level I use on power equipment.

Can we find somebody to do the snow removal for $120 per year? Possibly, but she wants the snow removed RIGHT NOW, as she's paranoid about getting a ticket from the city for failing to clear the sidewalks within 24 hours.

And I'm aghast at the breathtaking stupidity and apathy of the "American" people.

This is treason, and people need to hang for it.....

Hat Tip to Rev Paul who calmed me down enough to figure out how to embed the video.....

In anticipation of "festivities" happening regardless of who wins, I went out today to run some errands. Got a two-month supply of my meds, some cash, "extra" coffee and cigarettes, and filled up both cars and all my gas cans.

"Other" preparations of a defensive nature were finished a few weeks ago, and we're fine on that front.

While I was pumping gas, I noticed the guy across the pump island had on a "USAF Veteran" hat, and as I had on my USS Iowa BB-61 hat, we naturally struck up a conversation. He's a local guy, and had served his career working at Cheyenne Mountain doing ELINT stuff. Betwixt and between inside jokes about that sort of thing, he asked me if I was "stocking up" on gas before the coming storm. I told him I was "Channeling My Inner Boy Scout", and he cracked up. We agreed we should be OK up here, but that the Denver/Aurora area would go up in flames of Peaceful Protest if Trump won, or flames of "Joyous Celebration" if the commies won.

I said I'd only seen a few gatherings with signs, all of them in support of "Conservative" issues and candidates. Given the number of Slow Joe and Da Ho signs I see up, I was quite surprised to see them out.

He said there were some "BLM-Type" people at the courthouse engaging in "Voter Intimidation", and that he almost got into it with them. They (Three very large, very dark-complected men) were standing in front of the ballot drop box, and demanded to know who he voted for before they'd allow him to put his ballots in the box. He said he told them loudly, and in no uncertain terms, that it was none of their business, and to please move. He said they started to come towards him, at which time two security guys and two Sheriff's Deputies came out and defused it, telling the "Peaceful Protesters" to disperse to some distance from the drop box.

I was kinda flabbergasted when he told me that. This isn't L.A. or Chicago, or some other Big City. We're a city of about 170,000 people, and a good sixty-plus miles from the nearest one. We're part of the "Front Range Urban Corridor" , with ~5,000,000 people in it, but to see Big City Shit like that (pardon my French...) here really snapped me back to reality. The Bad Dudes really are everywhere these days, not just in their rat-hole cities anymore.

Time to get moving on our CCW permits.....

And from my son, who's a manager at a Major Chain Grocery in Lost Angeleez, we have.....Empty Shelves! 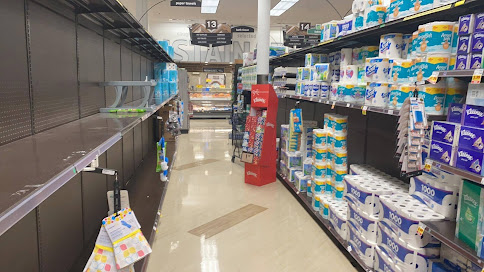 They have ZERO paper towels, and the toilet paper you see is all they have left. He said some other items were short, forget which ones, and they have they store windows boarded up solid, with armed guards in the store after closing.

We started moving in here!

We closed on the 31st, and started moving in boxes of stuff on the first while waiting for the "Pods" our furniture, housewares, clothes, and other stuff were packed into were delivered.

It's been a great three years, watching our grandson grow from a 10 week early preemie to the healthy young kid he is today, and watching the seasons go by.

Learned a LOT about the weather, too, and how to dress for it.

And got the house all into shape from what it was when we bought it. New roof, new windows, a very large tree removal, and a new Southern fence, along with $500 worth of light bulbs, new washer and drier, towels, bedding, and a host of other items needed to fill up this big place.

I learned how to make and tend a decent fire in the fireplace, decent meaning it won't burn down the house or go out in 20 minutes, and got a crash-course education in the maintenance and operation of snowblowing equipment.

We've made some friends in the neighborhood, watched it change significantly, and found some nice places to go for live entertainment.

No, I don't have a Battleship to go play on, but we're no longer in Lost Angeleez, and that means a lot.